If you saw the 2017 Grammy Awards on Sunday night, you probably noticed Ed Sheeran’s performance in which he used a massive new looping system called the “Chewie II” (Chewie 2).

In what appears to be a nice upgrade from his previous “Chewie Monsta” system, I was excited to see live looping by a solo artist get such great exposure in the mainstream media spotlight.

As someone who has been performing with live loops for the past decade (holy cow, I can say that now), I got very excited about this, and apparently, so did many others.

Despite playing for audiences of vastly different sizes, Ed Sheeran and I have actually faced some of the exact same challenges in recent years. Why? Because we both felt the pain points that come with traditional looping systems and because we both believed there was a better way.

We each began our looping careers using traditional stompbox-style pedals. He was on the BOSS RC-20, and I was on the BOSS RC-50. These pedals are super fun and great for pub gigs or house parties, but lend themselves to so many challenges (mic bleed, analog power issues, signal routing, sound engineer control, real estate, tone degradation, etc.) whenever playing in a bigger room with more people. For Ed, that means huge theaters, arenas, and even stadiums. For me, that means corporate events at large clubs, weddings with hundreds of people on hand, or even outdoor festivals or fundraisers where I’m playing at a high volume. We even approached the same manufacturer about doing some custom work for us, and in the end, he turned us both down. It was time to build this thing ourselves!

What Does the Chewie II Really Do?

First of all, let’s take a look at this overhead shot from Sunday night’s Grammy performance: 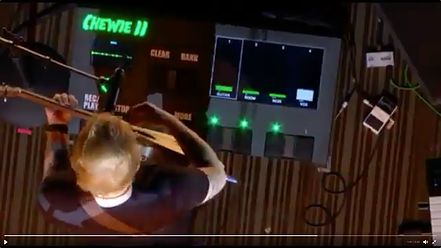 These pedals are actually old gutted BOSS RC-20 components that were used in the design because Ed likes the feel of them. There’s always something to be said for such a “human factor” in the design so while it may seem like an odd approach, I really can’t blame him for it.

Each of these switches has actually been repurposed to trigger a MIDI note or CC that is sent to a computer that is off stage. His guitar and MIDI keyboard are also both sent straight to that computer, connecting through an audio interface that likely uses a low-latency thunderbolt connection.

The computer is running software called Ableton Live. I can’t speak to the exact configuration of his software, though I know that in previous versions, he was running a plugin called Mobius– an open-source looping package that could be used inside of the Ableton Live environment. With the recent addition of native looping capabilities into Ableton Live, I can’t speak as to why Ed would need to be using Mobius anymore unless he just really liked it.

Buttons 1, 2, 3, and 4 allow him to select one of 4 possible loop banks to work with. While these are all synchronized to the same clock through Ableton (which allows for a much tighter sound across the 4 loop banks), He can have a lot of fun with these. They can each overdub themselves as many times as possible (create as many layers as he wants on each bank), and stop or even clear individual loops as he works through the various sections of a song.

Two of the BIGGEST advantages that the Chewie II (Chewie 2) has over conventional looping systems are:

Conventional Looping systems allow you to record into any given loop bank from any given source. Sounds cool to have options, right? Well, what happens when you’re laying down that rhythm guitar loop in a loud room? The mic will bleed into the loop. Accidentally bump your guitar or cough while laying down a keyboard loop? More bleed. The Chewie (and Ableton Live) allow the user to determine specific signal routing so that only the guitar can be recorded into the guitar loop bank. No mic can record into the loops on any other bank than the one that is dedicated. It makes for a much cleaner sound, especially in large rooms with at high volumes.

Separate output lines for all sound sources and loops

One of the biggest challenges that solo looping performers have is with their relationship to their sound engineer. It often involves sending a single channel to the front of house (FOH) which sounds easy but can cause great difficulties. A good sound engineer needs to be able to control not only master levels and EQ but needs to be able to do so on a per-channel level. This means controlling the vocals, guitar, and keys, and each of the 4 banks of loops that he creates. There is not an off-the-shelf looper on the market that is capable of such an output configuration, especially with a channel count like this where Ed likely has 8 output channels (Mic 1, Mic 2, Guitar, Keys, and 4 loops).

The addition of LED displays allows him to monitor his overall loop position (small display on left) and individual loop levels (large display on right) throughout his performance. Kudos to his team for putting this system together. It’s getting a lot of attention as it certainly should!

The DQB Approach to Live Looping

Last year I developed a software-defined looping system that I believe is not only more accessible to the general public than the Chewie 2, but actually more capable in many ways. Here’s how I did it:

I knew that software was the way to go Ableton Live is a very powerful tool, so I got over the emotional hurdle of performing with a laptop nearby (I know the old guys and purists will mock me for this because they refuse to do it), started learning Ableton, and envisioning how this would all feel.

I needed a good way to communicate with Ableton using my feet (my hands are busy playing guitar), and I wasn’t necessarily tied to the BOSS RC-50 feel. So after shopping around and some meetings at the 2016 NAMM show, I decided that the RJM Music Technology Mastermind GT22 (pictured below) was the perfect tool for the job. This beast of a MIDI controller is a blank slate and allows the user to programmatically define the behavior and appearance of each of its 22 buttons- and to do so page after page with more options than I could imagine at the time.

I connected my wireless guitar and mic systems through a low latency audio interface, set up some basic synth sounds with my Novation Launchkey 49, and the workflow started coming together pretty nicely. 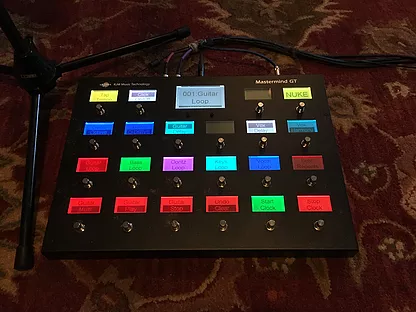 On the GT22, I put START and STOP buttons right where I could easily reach them, named my 5 custom loop banks (Guitar, Bass, Oontz, Keys, Vocals) on the 2nd row (less time-critical to tap, so farther away), and then added my more time-critical buttons (Rec/Play, Stop, Clear, etc) to the first row. Each one of my loop banks is represented by a different page on the GT22, so I’m still tapping the same position each time I want to record, play, stop, undo, or clear- regardless of which page I’m on.

On the GT22, I put START and STOP buttons right where I could easily reach them, named my 5 custom loop banks (Guitar, Bass, Oontz, Keys, Vocals) on the 2nd row (less time-critical to tap, so farther away), and then added my more time-critical buttons (Rec/Play, Stop, Clear, etc) to the first row. Each one of my loop banks is represented by a different page on the GT22, so I’m still tapping the same position each time I want to record, play, stop, undo, or clear- regardless of which page I’m on.

The real estate of the GT22 even allowed me to add some global (present on all pages) buttons for the most common guitar effects that I use- octave, overdrive, and delay- which I define in software using Guitar Rig from Native Instruments.

I finished out the top row with controls for my tempo, click track (something I highly recommend for super-tight loops), and a “NUKE” function to stop my clock and wipe all of the loops out at once- likely the same behavior as the Chewie’s CLEAR button.

Then it got really fun. Without purchasing any additional plugins, I was able to add all kinds of new “DJ Style” effects that I could never dream of with a conventional looping system- beat repeat sequences and filter sweeps suddenly added a whole new dimension to my live shows. I was suddenly walking the line between “solo acoustic performer” and “electronic music artist” with the ability to play anywhere along that musical spectrum at any given event. In party environments, I can even trigger quantized drum loops with the push of a button for that dramatic “drop” feel that can get the beats pumping even more quickly after a build. I must say that with Ed’s lyrical references to clubs and raves that I bet he would have a crazy amount of fun with this!

This took some re-training for me. There’s a different mindset that a live looper needs to have when moving to a software-defined system. While at first, I met so many hurdles to the migration, I’m so glad that I stuck with it and built this system. It’s so incredibly powerful and flexible, and I’m convinced that this approach will ultimately replace traditional looping systems which are already starting to be phased out.

I’ve been using this new system for a few months now, specifically for events such as weddings, corporate events, fundraisers, and private parties. I’ve also been receiving quite a few inquiries locally (in the Dallas/Fort Worth area) and through social media (Facebook and Instagram) about my approach to this system.

For all inquiries related to booking or consulting, I may be contacted directly by email: dan@dqbentertainment.com.