January is really a gift to a full-time musicians. Very few people get married, corporate events are slow, and with credit card hangovers from the holidays, not many people are hosting private parties in their homes. Even many of the bars and restaurants put the brakes on their live music schedule in order to cut losses during a slow month where many people are trying to eat healthy, cut back on drinking, and stay at home or hit the gym instead.

While many musicians fear this drought, complain, and hustle to get every little gig that they can, I like to accept it for what it is and instead, use this time for something that I don’t get to do when I’m busy- R&D projects!

While my show has certainly evolved over the past 9 years (wow, almost a decade since I started this one man band!), there’s definitely been one aspect of my live performances that has been bothering me and I’ve been yet to address. At the core of my live shows, I’ve been using the exact same loop pedal the entire time- yikes! I’ve always had two of them on hand and they’ve served me well, but the BOSS RC-50 from Roland has actually gone obsolete, replaced by the larger RC-300, which seems like a step in the wrong direction if you ask me.

As I’ve added new effects to my rig over the years, my pedal board has grown. There are pedals for overdrive, octave shifts, wah, delay, vocal effects, and more. Not to mention a power supply called the MONDO (that can’t be small, right?) and tons of custom cabling that even at it’s tightest, still introduces its problems- extra weight on the pedal board, extra connections that can fail, extra locations that could short, and whether I like it or not, an extra noise source as my guitar passes through each analog device.

Additionally, as I’ve played more (and bigger) rooms over the years, I’ve run into more challenges where I know that I could travel lighter, bring a better rig, sound better, and create a more enjoyable show for both me and my audience. I’ve been shopping solutions for about a year now. I’ve looked at every off the shelf project, designed things on my kitchen whiteboard over and over again (and probably got in trouble for erasing some of my kids unicorn drawings in the process), and even gone as far as meeting with a manufacturer who I was hoping could do a custom build for me. He rejected my proposal, but it turns out he also rejected Ed Sheeran’s, so I don’t feel so bad about it.

With nothing out there capable of meeting my vision requirements, I realized that it was time to build a custom loop system. So here it is, a peek in to the latest project from DQB labs- the all digital, software-based looper!

Before diving any further, I need to give some credit where credit is due to my very good friend, partner in #oontz, and consultant Paul Mandeltort of Flybac, LLC. Paul and I have been talking about this concept for months, and after test-driving many of the tools I needed at The NAMM Show, we agreed on the best gear for the job and had him fly in from Chicago for the weekend to start piecing this thing together.

I should first clarify that this project is still just that- a project. It will likely be a few months before you start to see this out at my gigs. While we have the core functionality working, there are still a few kinks to work out, some features to add, and a lot of time that I’ll need to practice, training my brain (and feet) to loop all over again.

Much like I always preached during my time at National Instruments, moving hardware functionality into software can be extremely powerful. By abstracting these aspects of my performance, the rig will not only be lighter, but I can dial in just about any tone I want, change it whenever I want, yet not worry about knob positions every time I set up my rig. I can also program loop functionality to work however I want, and route signals in a way that will allow for more control and a better sound- whether set up by me at a small gig, or a sound engineer in the booth at a larger gig.

The brain of the new system will be a software package called Ableton Live. This software has been around for about 15 years, but is now coming into mainstream use more than ever as live performances require a higher level of production. This is the stuff used by great solo performers like Ed Sheeran and Kawehi, used to drive backing track sequences for high profile bands (everyone from MUSE to your favorite local wedding band) and to manage live performances by some of the world’s best DJ’s. One thing to clarify is that my shows will remain 100% live. There will still be no samples or backing tracks used in any performance! 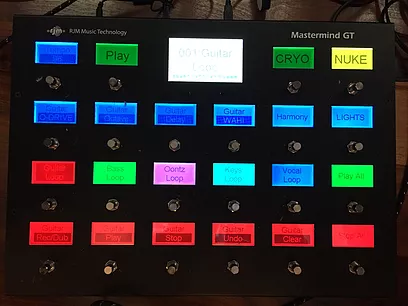 Ableton will manage, process, and route signal inputs from my guitar, keyboard, and microphone, and I’ll manage all of that with my feet using my new pedal board, the Mastermind GT/22 from RJM Music. This pedal board is really intended for use as an effects switcher, but because it is so open and powerful, we can really program it to do whatever we want as long as we are sending the right messages to the software. It uses a protocol called MIDI, which is essentially a digital messaging system that I can use to start and stop loops, change effects on my guitar or voice, or ultimately even send DMX messages to control my stage lighting. With the speed of the Thunderbolt bus on my MacBook pro, there is absolutely zero noticeable latency between the time I strike a note, it is processed in the software, and sent back out to the ears of the world- amazing stuff!

There are some really great side effects of this project too. Digitizing my guitar sound immediately (instead of passing it through a series of analog components) means you’ll be hearing a much fuller and cleaner sound at my shows. The number of effects is really limitless. No need for buying extra pedals that take up space. I can try anything out that I want in the software without having to buy a thing.

This project is opening up worlds of possibilities for the DQB, and I can’t wait to share it with all of you.

Stay tuned here for updates, as well as on my Facebook page and Instagram feed. There’s lots of exciting stuff coming down the DQB pipeline!